I thought Kim‘s iPod was history. When she would turn it on, the disk would try to spin up, whir whir, but after 4 attempts, it displayed the sad iPod icon and then shut down. Bummer. It was long out of warrantee. None of Apple’s website troubleshooting steps worked. Based on the disk failure, I knew the disk was dead, but we could buy a new one online somewhere. BUT. BUT. Kim said c’mon, open it up and see what you can do? I thought, What can I do? Nothing, the disk is dead, I can’t give CPR to a dead disk, forget about it. Then she told me about some kid, a son of a friend of a friend, who would fix any iPod for $20. I scoffed. However what do I have to lose, it’s already not working, I can’t make it any worse.

The hardest part was opening that sucker. I borrowed a co-worker’s iPod opening tool (I think he got it from iFixit.) It’s just a hard plastic thing with a sharpish end. I’ve heard of people using guitar picks.

After about half an hour, I got it open. It took me so long because I didn’t understand how it was put together, now I can open it in a minute. The trick is to press the edge of the tool in at an angle, see the diagram below (where the grey is the plastic part of the case, the blue is the metal, the red is the iPod opening tool/guitar pick/sharp plastic. 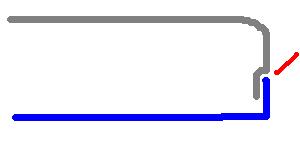 See my photo below for another view of the tabs (for all photos, click it to enlarge).

Once I got all the tabs, it was pretty easy to gently seperate the two halves.

There is a small ribbon cable connecting the halves. I unplugged the connection and set asside the metal case half.

With the parts all separated, I used a can of compressed air to blow out the dust (there was a some dust inside). I reconnected everything, being very careful that connections were tight. Snapped the case back together. Powered the sucker on and it booted up just fine, and has been working fine ever since. I’m not saying that you can fix your iPod this easily– but this was my experience.

So. Tracie Rules had a similar problem, not exactly the same though. Her iPod wouldn’t boot at all wouldn’t even try. She said the before, it would lock up when she would try to play certain songs (that makes me think disk error). Eventually the pod just stopped doing anything. Wouldn’t power up, nothing. Me feeling like Mr. iPod-Fixer-Man says sure let me see what I can do. So I do the above steps, and Lo! Tracie Rules’ iPod boots. Cool. Cool, but those songs that previously caused it to lock up still caused it to lock up. So, I suggested, zero-out the iPod disk from your Mac, then reformat and reload the iPod. (I’ve no idea how to do this on a Mac) This is in the hopes that this procedure will find and mark for dis-use any bad sectors on the iPod disk. She did this (or rather delegated the task to her husband), and Lo! Part II, it works without crashing.

So with these two events, the iPod hardware is a little less of a black box to me.

Now for Kim’s side of the story, which I haven’t even read yet (she told me not to until I wrote mine). I say in my defense that mine is only supposed to be a techie how-to.

One thought on “How I fixed Kim’s iPod”