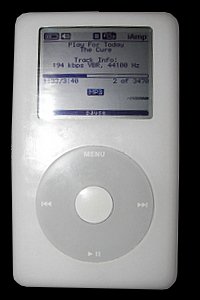 I use my iPod all the time, and I am really pleased with Apple’s User Interface for the iPod, it’s simple and easy to use. However, “simple” and “easy to use” doesn’t satisfy the geek in me, so I have to tweak. Apple doesn’t give you too many options to tweak the iPod UI. You can change the items displayed on the main menu, you can display the time in the top line of the screen, but that’s about it. This geek wants more. So, why not entirely replace Apple’s firmware with something else, like Linux or Rockbox?

Running these was fun, but day to day, I use the Apple firmware. Do I loose my geek cred? I dunno. There are so many little things that the Apple firmware does so effectively, it’s hard to give up, even if I can’t customize it as much as I’d like. Although maybe I’ll wanna Make something….

How I fixed Kim’s iPod